IBIS 2011 kicked off last night with its welcome reception and solutions showcase demonstrating some of the latest business intelligence solutions and one solution in particular created quite a buzz – MyBI Mobile. 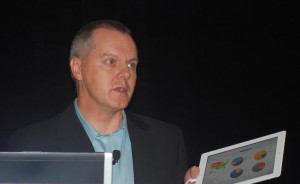 As I walked around the showcase showing Xcelsius dashboards running on an iPad, people stopped with looks of disbelief mixed with wonder.

“How are you doing that?”

“Xcelsius doesn’t run on an iPad or an iPhone”

Well, I am happy to report that with MyBI Mobile, not only does Xcelsius run on an iPad and an iPhone, but also on an Android. And it not only runs but it sings too! It has a fabulous simple menu system to serve up different content on the device and that content can also be Crystal Reports, Web Intelligence, Desktop Intelligence in addition to Xcelsius. With Web Intelligence you can also create new reports from the mobile device – that’s cool! When viewing and interacting with the content, you can perform a “pinch and zoom” action on any part of the screen to automatically enlarge that area of the dashboard or report.

While many companies have invested in building both dazzling and effective Xcelsius dashboard business intelligence solutions, they have often been challenged when trying to find ways to move these to mobile devices. The operating system for the IPhone and IPad (iOS) does not support Flash and SWF outputs natively but with MyBI mobile the barriers have been lifted. You can now take your key Xcelsius dashboards and just serve them up on iPads, iPhones and Androids without changing them and interact with all the features just the same as on the PC.

I cannot express enough how incredible this is and what it means to the millions of Xcelsius users around the world who want to take their dashboards mobile  – you are free of your shackles and you can now deliver Xcelsius to the most popular mobile smart devices out there.

I recently heard there are an estimated 200 million iOS devices in use today and now all those users can enjoy the full functionality of the amazing data visualization of Xcelsius through MyBI Mobile.

If the excitement at IBIS is anything to go by, you will certainly be hearing and seeing a lot more of this solution in the coming months so stay tuned.

Paul Grill, Co-Founder and CEO of Infosol Inc., is an information technology guru with more than 40 years’ experience in the IT industry. Recognized as an industry expert, Paul’s vision is to collaborate and develop long-term global relationships, resulting in the successful implementation of business intelligence solutions. Paul believes a company’s success with Business Intelligence is a combination of data and people’s insights and actions. He believes in the coexistence of technologies. With a strong portfolio of clients ranging from fortune 50 companies, start-ups, and middle market, Paul takes pride in his ability to deliver positive transformations impacting company’s productivity and profitability through the application of business intelligence. He is often heard saying that “data holds amazing nuggets that can be used to create limitless BI solutions that make a difference in people’s lives”. Throughout Paul’s career, he has been a speaker, lecturer, and writer sharing his passion for Information Technology and Business Intelligence. On a personal note, Paul is an avid runner, Tai Chi practitioner, and youth soccer coach. Paul’s curiosity for knowledge expands beyond technology with a passion for Ancient Egyptology and Gorillas.
@pgrill
Previous Happy Father’s Day
Next Best Xcelsius Dashboard Award Winners Receive Accolades at IBIS 2011