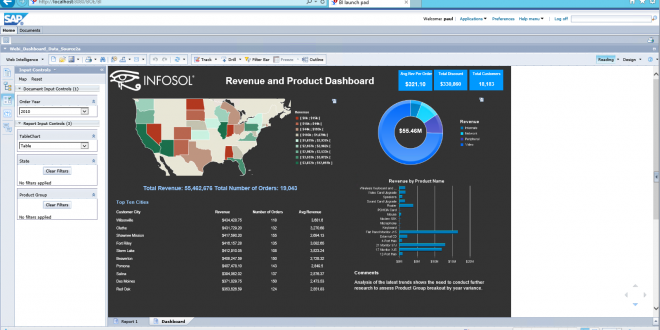 SAP just announced the release of the latest update of its BusinessObjects BI suite, namely BI 4.2 SP03, following the first release BI 4.2 SP02 back in March

In both announcements, Web Intelligence really stood out in terms of new features and overall significance compared to all the other tools in the suite. On the one hand this should not be a surprise since it is the most popular and widely-used of all the SAP BusinessObjects Analytics tools but, on the other hand over the last few years SAP has focused far more attention on its newer analytics tools.  I sense, as do others in the SAP BusinessObjects community I have spoken to, that there has been a shift within the SAP Analytics leadership and Web Intelligence is , once again, being recognized as the flagship BI tool of SAP.

Web Intelligence is and has always been a Business Intelligence Query, Analysis and Reporting tool. The latest functionality additions emphasize that and to call it just a reporting tool, as I have seen on some SAP marketing slides, is simply a miss-classification and lack of understanding of its capabilities. Web Intelligence allows you to perform ad-hoc queries against both relational and OLAP data sources, slice and dice, drill-down, drill through, perform data discovery, create dashboard and scorecard visualizations and format amazing looking reports. It can be used on-line, off-line, on mobile (HTML5) and be published or exported to the most popular commodity formats. Many organizations use only Web Intelligence for all their BI needs or a combination of Web Intelligence and SAP BusinessObjects Dashboards (Xcelsius).

So in Web Intelligence 4.2, we have seen a ton of new functionality ranging from Shared Elements to allow you to save and reuse charts, tables and different parts of your reports  (with the metadata) to Linked Elements allowing you to integrate all types of third party charts and components. This included a series of integrated geo-maps which have been further enhanced in SP03 enabling you to use latitude and longitude as data points on the map and add custom locations.

Another great Webi feature released with 4.2 was the commentary feature allowing you to collaborate around documents with context sensitive comments that are associated with just the document and stored in the audit logs or location of your choice. The commentary has been further enhanced in SP03 allowing you now to apply comments at the block level (charts or tables) and individual cell level in a table within the Webi report.

Input Controls have become popular in Webi documents for providing an easy way to interact with a document that has been options and variables. Now with Webi 4.2 SP03, cascading input controls are supported with dynamic filtering of the list of values for nested selections.

The Dynamic HTML (DHTML) client option of Webi has been enhanced adding features that were previously only available with the Java client including conditional formatting and support of XLS as a data provider, Query Panel support for UNX and support of complex filters in the Query Panel.

Other new Webi 4.2 SP03 features include Merged Variables (combine a data provider and variable into a single object),  References (new object for a variable that returns the value of a specified cell in the document),  choosing the image density when exporting a document to PDF or Excel and further user interface enhancements  for customizing look and feel of charts, graphs and more.

I am already seeing interactive Web Intelligence reports and dashboards that I would never have guessed were created in Webi because the customization capabilities are so vast.

These are just a few of the highlights and there is even more being promised with future service packs. All-in-all, Web Intelligence has evolved into a one-stop shop for BI reporting, ad-hoc query and analysis that just keeps getting better. Bring it on!

Paul Grill, Co-Founder and CEO of Infosol Inc., is an information technology guru with more than 40 years’ experience in the IT industry. Recognized as an industry expert, Paul’s vision is to collaborate and develop long-term global relationships, resulting in the successful implementation of business intelligence solutions. Paul believes a company’s success with Business Intelligence is a combination of data and people’s insights and actions. He believes in the coexistence of technologies. With a strong portfolio of clients ranging from fortune 50 companies, start-ups, and middle market, Paul takes pride in his ability to deliver positive transformations impacting company’s productivity and profitability through the application of business intelligence. He is often heard saying that “data holds amazing nuggets that can be used to create limitless BI solutions that make a difference in people’s lives”. Throughout Paul’s career, he has been a speaker, lecturer, and writer sharing his passion for Information Technology and Business Intelligence. On a personal note, Paul is an avid runner, Tai Chi practitioner, and youth soccer coach. Paul’s curiosity for knowledge expands beyond technology with a passion for Ancient Egyptology and Gorillas.
@pgrill
Previous Data Warehouse Design – Inmon vs Kimball Architecture
Next The SAP BI Strategy: Convergence or Conservancy?