For those of you not fortunate enough to live in the beautiful desert southwest you might not have had the honor of knowing of the tree that is the bane of my existence.  It is the Palo Verde.  I believe that it is Spanish for “Cursed Tree From the 7th Level of Hell” that or green stick…one of the two.  Yes, it is actually the official state tree of Arizona for some strange reason.

Anyway, this particular tree has some very specific adaptations to allow it to thrive in the desert.  First, it requires very little water and actually thrives in extreme temperatures.  As a matter of fact the one in my yard, or El Diablo as I like to call it, doesn’t seem to die no matter how often I “forget” to water it. 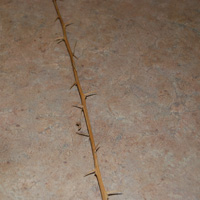 In addition to being very resilient to the heat and drought it also has thorns which grow approximately 25 feet long and are needle sharp to ward off predators or bad gardeners. The speed at which it grows is nothing short of amazing and the long thin limbs it grows have such a springy strength to them that they often slap back and will hit you in the face while trying to cut them.  Don’t worry though, the wood does dry out when cut from the tree and is no longer springy…in fact, when it dries out it, it becomes as hard as steel and can easily puncture a shoe or a car tire.  You can see this small branch that I didn’t pick up the last time I trimmed the tree and can imagine how painful it is to step on. 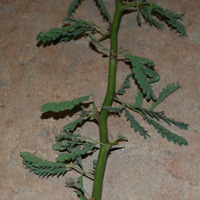 You might wonder why I have this particular tree in front of my house.  I wonder the same thing.  The tree was planted by the builders who did so as it also grows very quickly and looks green from a distance year round.  Needless to say they like these trees so much that no neighborhood in Arizona built within in the last 10 years is missing this particular delightful vegetation.

This brings me to my bi-summer blood ritual in which I have to prune El Diablo back so he stops clawing at the kids as they ride their bikes past the tree on the sidewalk.  I know that I should clean it up more often than I do and I’m sure that it would make the experience more pleasant if I did but what can I say, it isn’t my favorite bit of outside work.  In fact, the occurrence I’m talking about today actually took place in late July but I have been too injured and traumatized to write about it.

This past clearing was particularly painful and it was only partially my fault.  We were having friends over and I continued to put off the trimming until it was just a few days before they were going to be here and I had to trim it.  So I went outside after the sun went down (it was July remember) and before I went out I checked the temperature…114.  Yes, sun down, 60% humidity, 114 degrees.  Me and El Diablo.

You might be wondering what the final score was but you’ll just have to take my word for it, I was too embarrassed to take a picture, but it was better than I found it.  El Diablo was cut down until the kids could walk down the sidewalk without being attacked but I did run out of space in the garbage for branches.  He probably won the war though as I was full of holes in my hands and arms, one in the bottom of my right foot; in addition to the two broken-off pieces of the thorns which took a week to work their way out of my hands.  I only had one major scratch on my face which was an improvement from the spring trimming.

I won…I think.  Don’t worry; I’m going to trim it up before it gets so out of hand next time.  I promise.

So in case you were wondering why I am going on about El Diablo it is simple.  I was trimming it up and taking these stabs to my hands and arms and thinking about how much I’d rather be working.  As I was contemplating my current projects I was forced to recognize that I was not taking my own good advice.

Any time I go into a customer project I remind everyone involved that they should plan for maintenance on what they are building.  It is so hard to pull off though.  It isn’t just me of course.  We are all bad at planning beyond the current emergency.  It is so easy to focus on the immediate needs and just put in “temporary solutions” knowing that they will be cleaned up later.  Of course the problem is that the temporary solutions become permanent and they end up causing more work, more blood, more pain than if we had just built into our plan a little time at the end of the project to do clean up and maintenance.

In teaching BI for Executives, I always give the advice to put aside a few weeks every year to perform cleaning and maintenance in the systems you own.  I think it is good advice, but it is difficult to make happen.  For instance, how many reports do you have in your environment that aren’t being used?  Universes?  How about tables and ETL?

If the plan is just to wait until a project comes along which will replace these tables/ETL/reports/universes how much additional work are you going to create as the people who originally wrote these and know how (or even if) they are being used are long gone or certainly the memories are.  The normal prescription for these problems is to document everything and that will leave you with a map of how to deal with the eventual maintenance.  The problem with this is that the documentation is out of date before it is finished and just like my tree, knowing exactly which branch you should cut and where is a lot easier to know when you go after it on a regular basis and not at night when you have guests coming over the next night and the garbage truck coming to get your trimmings in 10 hours.

My experience has been typically that project teams end up even making the problem worse when confronting these issues because rather than doing something with the old universe/tables/reports/ETL they just build everything from scratch because of the unknown impact of touching the old stuff and there is never enough budget or time to deal with it.  Even with technology upgrades the default behavior is to import everything and figure it out later.  So now instead of one bad situation, we have two.  Don’t worry…we’ll get to the old stuff…in the next project.

My suggestion is the same I have for myself and El Diablo.  We all have schedules and it is incumbent upon us to put our highest priorities on there to make sure that they get done.  We must schedule, plan and prioritize maintenance outside of projects to clean things up.  That requires some sales to management and some hard decisions but this still must be done regardless of your company size or situation.  Don’t we make time to brush our teeth in the morning no matter how tight our schedules are?  If we put this maintenance off we might save a few minutes in the morning but we’ll pay for it in hours, dollars and pain in the dentist’s chair.

There are tools which can help but even those require a person to run the usage statistics and make phone calls and find out if what you are looking at is really not needed or just not needed often.  Call up your local friendly consultant if you need some advice on how to do this in your particular environment or at least sit down and figure out what maintenance is needed and can be scheduled on a regular basis in your organization.  If not for the sake of your developers do it for benefit of your poor customers who really aren’t sure why there are 10 shipping reports by region either.

Ethan Durda is Director of Business Intelligence Development for INFOSOL providing training, consulting and project management for both Crystal Reports and BusinessObjects. Recent projects have included an XI R3 conversion and heading up a large Web Intelligence report development project. Ethan has 14 years in Information Services experience in a variety of platforms and databases. He has extensive teaching experience and has taught all levels of users and developers both BusinessObjects and Crystal Reports toolsets. Ethan is also active in various Business Intelligence Groups including America’s SAP User Group (ASUG), and previous to that, the Global BusinessObjects Network (GBN) organization. He is also a member of the Data Services Special Interest Group Steering Committee.
@infosolinc
Previous SAP Mobile Business Intelligence
Next InfoSol Butterflies contributing to Charity Water’s September Campaign