The Secret to BI Sustainability – Reuse

I was recently in San Francisco over a weekend and got to be a tourist for a day. I was fascinated by the remarkable collection of old trams and streetcars that I both rode and saw throughout the city. They were original restored trams from different cities like New York, Boston and even Milan, Italy. 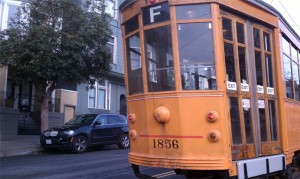 What a fantastic idea to restore these masterpieces and put them to the use they were built for rather than send them to a museum or scrapyard. A friend told me that the city was able to do this because the tram track gauge was standard and as long as the trams came from cities that used the same track standard they could be used.

Now, Xcelsius is undoubtedly one of the best and most popular data visualization tools for the PC but it was designed and developed for the PC using a mouse to navigate. A mobile device like an iPad, iPhone or Android has no mouse and navigation is through touch gestures. The standard dashboard components that ship with Xcelsius were never designed for touch gesture usage and often come up short when used on a mobile device.

Yet Xcelsius is such a versatile and great tool for developing customized dashboards so wouldn’t it be great if you could use it to create dashboards with components that are designed for mobile devices including touch gestures?

Well, that has recently become a reality thanks to a truly innovative solution from Xcelsius component developer, Inovista. They have created a whole set of Xcelsius add-on components designed for mobile devices and touch gestures along with a mobile application that transforms the resulting Xcelsius dashboard into a native iOS or Android application. This allows you to use the Xcelsius toolset you know, love and have invested in and build dazzling mobile dashboards. The resulting dashboards can also be used on the PC.

Another cool thing about this solution is that the dashboards can be either offline on the mobile device itself or connected to live data giving you the best of both worlds.

I have some of these mobile dashboards running on my iPad and they are both compelling and fast. Some of these will be featured at IBIS 2012.

As we hear more about HTML5 being the future direction for dashboards and mobile business intelligence, it is still evolving and the toolsets that are equivalent to Xcelsius are yet to emerge. The recent announcement that Xcelsius will move in the HTML5 direction is also some way off in the future.

Businesses need solutions today built with tried and tested tools. The idea of using Xcelsius to build mobile friendly dashboards with the Inovista and InfoBurst components allows you to leverage your Xcelsius investment and create easily maintainable and sustainable mobile BI solutions. It’s almost as cool as San Francisco using restored classic trams on their streets!

Paul Grill, Co-Founder and CEO of Infosol Inc., is an information technology guru with more than 40 years’ experience in the IT industry. Recognized as an industry expert, Paul’s vision is to collaborate and develop long-term global relationships, resulting in the successful implementation of business intelligence solutions. Paul believes a company’s success with Business Intelligence is a combination of data and people’s insights and actions. He believes in the coexistence of technologies. With a strong portfolio of clients ranging from fortune 50 companies, start-ups, and middle market, Paul takes pride in his ability to deliver positive transformations impacting company’s productivity and profitability through the application of business intelligence. He is often heard saying that “data holds amazing nuggets that can be used to create limitless BI solutions that make a difference in people’s lives”. Throughout Paul’s career, he has been a speaker, lecturer, and writer sharing his passion for Information Technology and Business Intelligence. On a personal note, Paul is an avid runner, Tai Chi practitioner, and youth soccer coach. Paul’s curiosity for knowledge expands beyond technology with a passion for Ancient Egyptology and Gorillas.
@pgrill
Previous March Madness
Next BI Visionary Santiago Becerra to Deliver Keynote at IBIS 2012