SABOC 2015: A Dash Clash Bash to be Remembered 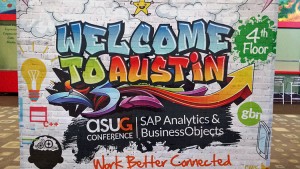 The ASUG sponsored SAP Analytics and BusinessObjects (SABOC) 2015 conference was a resounding success on many fronts, but it’s Developer Wars flagship event was definitely the highlight for me. This year’s “Dash Bash Clash” had several differences compared to previous events. Instead of being confined to a room for 24 hours to attempt to build a meaningful BI solution from a sparse set of data for a non-profit and devise an entertaining skit to present it, the teams were given almost 3 weeks to develop a solution using BusinessObjects tools in the cloud. In addition, each team had to have a SAP university alliance student as one of its members.

With more time to prepare both a solution and a skit, the result was a more polished set of entries delivered by less-stressed teams not suffering from sleep deprivation.

While the data provided was still a challenge, the four teams rose to the occasion and presented some very nice visualizations and Business Intelligence capabilities with InfoSol’s own Dashboard DiVA’s taking the accolades. Their dynamic  mindset dashboard using a clever combination of infographics and animations in Xcelsius developed by their university student participant was very impressive.

There was a stronger BusinessObjects emphasis at this year’s event with many excellent sessions on core BusinessObjects solutions delivered by both customers and vendor experts. There were also more hands-on training sessions than in previous years and these were very well attended. While there was some interest in the new analytics tools from SAP, there was more excitement around finding out about what’s coming in the next BusinessObjects release BI 4.2 which started its beta this month.

The Exhibit area became the central meeting place for SABOC this year with all meals and cocktails being served there, as well as a healthy variety of solutions and services for the sponsoring vendors. SAP was conspicuous by its absence, but it did not appear to affect the excitement and enthusiasm of both attendees or partners. This may have been an intentional move by SAP as more of its BI offerings and expertise are offered through its partners than ever before.

SABOC 2015 also saw the emergence of the new ASUG BusinessObjects community under the branding of the GBN (Global BusinessObjects Network). This was the original BusinessObjects User Group that was created by ASUG at the time of the acquisition of Business Objects by SAP only to be disbanded and integrated into ASUG a year later. This resurrection of GBN is significant in that ASUG recognizes the resurgence of BusinessObjects in the BI landscape and the need for this community to have a unique identity. There will be a lot more to come from GBN so keep an eye on it.

ASUG also announced next year’s SABOC to be held in New Orleans clearly establishing that this is both a significant conference that has wide appeal to the BusinessObjects and SAP Analytics communities and will not be merging with any other SAP or ASUG conference for the foreseeable future.

Paul Grill, Co-Founder and CEO of Infosol Inc., is an information technology guru with more than 40 years’ experience in the IT industry. Recognized as an industry expert, Paul’s vision is to collaborate and develop long-term global relationships, resulting in the successful implementation of business intelligence solutions. Paul believes a company’s success with Business Intelligence is a combination of data and people’s insights and actions. He believes in the coexistence of technologies. With a strong portfolio of clients ranging from fortune 50 companies, start-ups, and middle market, Paul takes pride in his ability to deliver positive transformations impacting company’s productivity and profitability through the application of business intelligence. He is often heard saying that “data holds amazing nuggets that can be used to create limitless BI solutions that make a difference in people’s lives”. Throughout Paul’s career, he has been a speaker, lecturer, and writer sharing his passion for Information Technology and Business Intelligence. On a personal note, Paul is an avid runner, Tai Chi practitioner, and youth soccer coach. Paul’s curiosity for knowledge expands beyond technology with a passion for Ancient Egyptology and Gorillas.
@pgrill
Previous HTML5 with XDC and dCode Gives Xcelsius a Bright Future
Next 6 Things You Can Do To Continue Learning About SAP Dashboard Development & Hone Your Xcelsius Dashboard Skills