Tech Tip: How to use System Configurations

IBIS 2013 was an amazing success. Thank you everyone; Customers, Partners, and InfoSol staff (including our summer interns) for making it possible and memorable.  I’ll say it again: Thank you… the experience was brilliant.

The education offerings, hands-on workshops, executive seminars, bootcamps… pre and post seminars were totally awesome.  The Keynotes  by Glen Rabie of Yellowfin on the Future of BI and by Paul Grill of InfoSol on LimitlessBI followed on both days by the panel discussion were everything that was promised and more…

We took videos (like we did in the past) and the dream is to bring you highlights… so stay tuned.

On Sunday night, we had our opening reception with a keynote by Paul Grill and the highly coveted dashboard awards.

Congratulations to our IBIS 2013 Dashboard Awards Winners from ARI, Bosch, PAMF and McKesson.  You can read about the winning dashboards and the solutions (Best BI Dashboard Awards at IBIS 2013) on the infosol website.

Here are links to our winners in previous years.

It was great to see everyone and the superhero theme was a hit and striking a BI superhero pose quickly became contagious and continued throughout the conference.

The photo on the right (one of my favorites) posted by Bryan Baca of his son on the balcony overlooking the pool kicked off a facebook contest to see who can get the most likes for their pose.  I like it because it reminds me why we do what we do.  It reminds me to see the world through new eyes.

If you missed this year’s IBIS, or if you want to re-visit some moments, we posted a ton of photos of the event on our infosol facebook page.  Check them out and if you have a facebook account, like us while you’re at it. 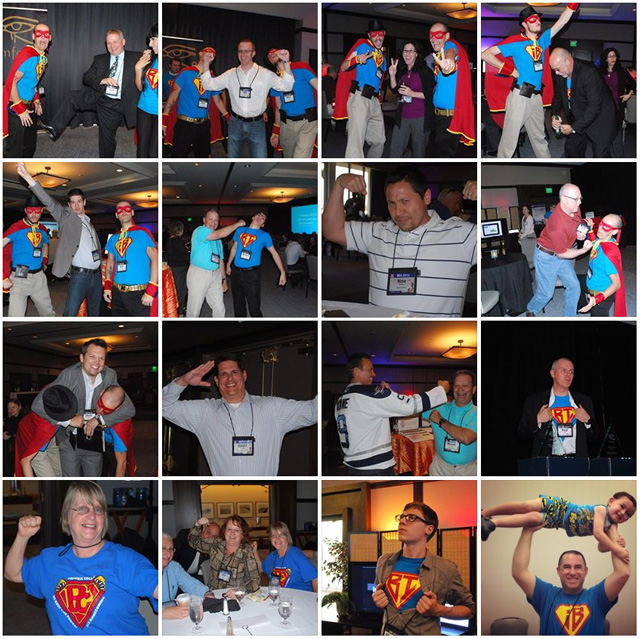 Congratulations to Ann Fulton from Phoenix College who won the most liked Superhero pose (4th row left), with Dave Wunderlich from McKesson coming in at a close second (3rd row, 2nd from the left).

As I write this, I am realizing that it’s impossible to capture everything that took place during IBIS 2013 in one blog post.  Some of us were tweeting during the event @infosolinc #IBIS2013 and #LimitlessBI… and if you hurry, you may catch the stream of that moment in time, and tweet your thoughts on the subject.  Don’t forget to follow us on Twitter.

Besides all the fun, the executive track that I attended (Inspired Business Intelligence 3.0) left me feeling that the title of superhero has been earned and is truly deserved by all the presenters.  I was humbled to sit and listen to our customers and partners tell their stories.  I was inspired to see the impact and value that their dashboards, applications, and  solutions bring to the world.  And best of all, I was happy that we were able to bring people together so that they can collaborate and dream together the future of BI.

Yolande Grill is the COO at InfoSol Inc. "I like to think of myself as the Chief Transformation Officer. My favorite quote to ponder is one from Trina Paulus: 'How Exactly does one become a butterfly? You must want to fly so badly, that you are willing to give up being a catterpillar'. I love feeling inspired."
@ygrilltweets
Previous IBIS 2013 Keynotes, Awards Presentation and Panel Discussions Not To Be Missed
Next Read infosol.com post about IBIS 2013 Dashboard Award Winners

In just the last three days I received three fascinating dashboards. The first was from ...