Question: What is a Flash Variable connection and what is it used for?

Answer: Flash Variable connection is used to pass a variable from one dashboard or interface to the second dashboard.

“California” is passed as a variable from the Parent dashboard to the Child, and the Child dashboard now shows data for California.

The data for Child dashboard is fed through Live Office and the WebI report that is feeding the dashboard has a prompt on State.

After selecting State, click on the button on the right, in the Parent dashboard, which will open the Child dashboard as shown below:

There are 2 aspects to this: 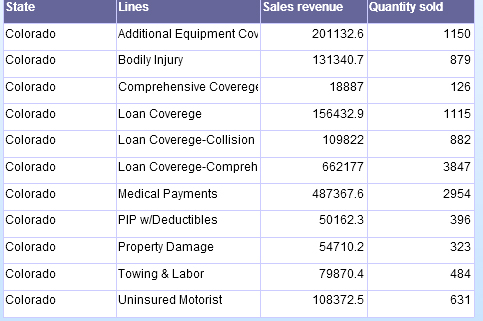 Cell E3 is where you have prompts being provided for the WebI report, so if you change the states in this cell then the data (E16:H26) will change and will reflect the changes for the corresponding state that is in cell E3.

The purpose of this Flash variable is so that we can pass the value of state from the Parent dashboard, or any web interface, to another dashboard.

a snapshot of the Parent dashboard

On the left side, you have a selector which is dropping state value in the blank cell; below is a snapshot from Excel:

Cell E3 is where the labels are being dropped, note that I have a URL button in Xcelsius, and I am pointing the URL to Cell E20. Cell E20 is the concatenation of E19 & E3.

Provide a suitable name for the range. Notice that the Range is pointing to cell E3, which means that the name of the state will come from the Parent dashboard through the Flash Variable to this cell, this is also the cell which is acting as the prompt for the WebI report for Live Office (refer to Fig. 4).

For the Live Office connection, in the usage tab, I have made the trigger based on a change of cell E3, since Live Office should refresh based on the change in this cell.

Export this child dashboard in html format to the inetpub folder. Publish the dashboard in this path: C:\Inetpub\wwwroot.

Put the crossdomain.xml file in this folder.

In this folder, you should now see 2 files – Child.html and Child.swf. Right click on the Child.html file and change its extension from html to aspx. Your file will now be Child.aspx. Right click on it to edit this file, here is how the file looks before editing:

Notice that “Enter value(s) for state: = California appears in 2 places. In this case, California is the default value. This is our Flash Variable, and to make it dynamic, replace California with <%=Request.QueryString%>. Save the file after making the changes.

INFOSOL is a leading provider of SAP BusinessObjects, consulting, products, education and technical support throughout North America. With an in-house product development team and partnerships with other leading Business Intelligence solutions providers around the world, INFOSOL offers the best-in-class and most innovative SAP BusinessObjects add-on solutions. These include InfoBurst for Automated Report and Dashboard Bursting and Publishing along with Intelligent Cache Query for optimal Xcelsius performance and scalability. Having more than 15 years experience in providing end-to-end Business Intelligence applications, INFOSOL has learned to see beyond the data and deliver visionary solutions that inspire.
@infosolinc
Previous Sustainability and Sizzle at Sapphire – Day 1
Next Bursting Xcelsius Dashboards