Breaking News
Home / Business Intelligence / Limitless BI – Up, Up and Away

Limitless BI – Up, Up and Away

Growing up, I used to watch the animated version of Superman on TV in black-and-white and I can still remember that introduction of :

“Faster than a speeding bullet.

More powerful than a locomotive.

Able to leap tall buildings in a single bound.

I always felt that this narrative greatly understated what Superman could do. Of course he was faster than a speeding bullet since he could fly into outer space in just seconds; he was more powerful than a dozen locomotives and, since he could fly, bounding over a tall building was nothing! The fact was that Superman had amazing super powers and could do almost anything we could imagine. Since our imaginations have no boundaries, the capabilities of Superman seemed limitless.

Yet Superman had a day job as mild-mannered Clark Kent, the shy, fumbling and often inept newspaper reporter. Clark was portrayed as a real nerd and it was that characterization which gave hope to all of us other inconspicuous geeks. Maybe, we had hidden super powers too!

Business Intelligence today is taking on super power status as it provides the capability to analyze data and predicts trends that can transform organizations and actually change  the world. The possibilities are only limited by our imagination – this is Limitless BITM.

Many of the people creating BI solutions are a lot closer to resembling a Clark Kent than a Superman but, often, those super powers are just waiting to be unleashed.

The theme of this year’s InfoSol Business Intelligence Seminar (IBIS 2013) is Limitless Business IntelligenceTM and one of its objectives is to provide a collaborative environment where the “Clark Kents” of BI can gather and hone their super powers to conceive and share incredible BI solutions.

The hands-on advanced immersion boot camps and executive seminars at IBIS are designed to inspire you to see a world of infinite possibilities and Limitless Business IntelligenceTM solutions. 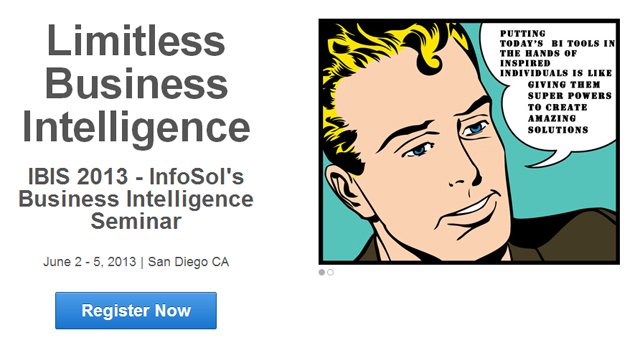 At IBIS 2013, along with LimitlessBI, InfoSol is hosing the First Annual InfoBurst Conference.  The three-day event, focused on all things InfoBurst, is a unique opportunity to learn new InfoBurst skills, exchange knowledge and ideas with peers and experts and influence the future direction of the solution.

Paul Grill, Co-Founder and CEO of Infosol Inc., is an information technology guru with more than 40 years’ experience in the IT industry. Recognized as an industry expert, Paul’s vision is to collaborate and develop long-term global relationships, resulting in the successful implementation of business intelligence solutions. Paul believes a company’s success with Business Intelligence is a combination of data and people’s insights and actions. He believes in the coexistence of technologies. With a strong portfolio of clients ranging from fortune 50 companies, start-ups, and middle market, Paul takes pride in his ability to deliver positive transformations impacting company’s productivity and profitability through the application of business intelligence. He is often heard saying that “data holds amazing nuggets that can be used to create limitless BI solutions that make a difference in people’s lives”. Throughout Paul’s career, he has been a speaker, lecturer, and writer sharing his passion for Information Technology and Business Intelligence. On a personal note, Paul is an avid runner, Tai Chi practitioner, and youth soccer coach. Paul’s curiosity for knowledge expands beyond technology with a passion for Ancient Egyptology and Gorillas.
@pgrill
Previous Share Your Inspired BI Case Study at IBIS 2013
Next Becoming an “Iron Chef” Dashboard Creator