Living outside of a city has its advantages in terms of space and silence, but you also lose a lot of the city facilities that you tend to take for granted; such as emergency services, sewer and  garbage disposal, which now become private subscription services that you must pay for individually.

Last week, I received my quarterly garbage removal services bill from a local company whose slogan is “100% satisfaction guaranteed or double your garbage back!”  When I looked at the bill, I found they had a sense of humor in more ways than one.  Three months ago they increased the fees by 10%, claiming their costs in all areas were going up, and added a second 10% on top as a “Fuel Surcharge” stating that diesel was almost $5 a gallon. So this quarter, with fuel prices being at a 5 year low, I expected the fuel surcharge to disappear.  And, low and behold, it did.   But not in the way I thought it would.  Instead the President of the company enclosed a letter saying that “Fuel Surcharge” was a misleading term which we should do away with and call it “Industry Fees” which more accurately describes their extra running costs.  So the 10% increase and the 10% surcharge stayed, and my bill remained the same.   Very clever – I told you they had a sense of humor! 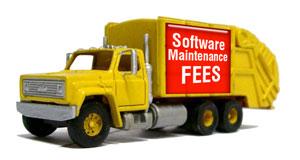 In the last year, I have seen a lot of software companies looking to increase their revenues through maintenance fee increases and trying out some tactics that are not that different from my garbage disposal company.

In order to justify these maintenance fee increases, many BI software companies have been equally as creative as my garbage disposal company.  They created new categories like Standard, Corporate, Elite, Premium, Platinum and dozens of others with great marketing behind them to convince you of their value and essential need.  They explained how they are investing more resources in support and research, in addition to creating new escalation processes to improve service.

Yet, during this same period of time, we have seen most of these same BI software companies outsource and offshore both their support and development to countries like India and China where their labor costs have been dramatically reduced.  Also, in most cases, neither the quality nor the support of the software has significantly improved.
However, many companies have launched their own counter-offensive to the BI software companies. Most of those owning large amounts of software have negotiated discounted fees up front and added contractual clauses limiting the annual maintenance increases to under 5% of the previous year.  Others have figured out that it is cheaper sometimes to drop support of older, more expensive software and repurchase smaller and less costly replacements.

So, now, here we are at the beginning of 2009 in the worst global economic crisis in more than 50 years with almost all businesses looking for ways to contain and reduce costs. Software maintenance is no longer an insignificant cost and will no doubt come under a lot of scrutiny this year.  Many corporations and institutions will be going back to these software vendors this year and requesting reductions and special payment terms, or both. There will also be many who will make the decision to reduce the amount of product under maintenance. This may be both a symptom of reducing their own number of employees or because of reduced usage due to reduced business.  By the same token, there will be some that will completely terminate maintenance, not out of preference but out of need.

All of this would suggest that if BI software companies want to keep customers under maintenance, and have at least a reasonable maintenance revenue stream this year, they will need to get creative in ways other than increasing their fees and creating new surcharges.  I think we are likely to see a resurgence in “pay by the drink” support calls, fee-based software upgrades and first year maintenance included in the software purchase price.  We may also see more companies turn towards renting or leasing software or Software as a Service offerings in which maintenance is built in.

One thing is for sure, BI software companies will not be so quick to add those “fuel surcharges” in 2009. As for my garbage disposal, I will be switching to another company with better pricing next month.

Paul Grill, Co-Founder and CEO of Infosol Inc., is an information technology guru with more than 40 years’ experience in the IT industry. Recognized as an industry expert, Paul’s vision is to collaborate and develop long-term global relationships, resulting in the successful implementation of business intelligence solutions. Paul believes a company’s success with Business Intelligence is a combination of data and people’s insights and actions. He believes in the coexistence of technologies. With a strong portfolio of clients ranging from fortune 50 companies, start-ups, and middle market, Paul takes pride in his ability to deliver positive transformations impacting company’s productivity and profitability through the application of business intelligence. He is often heard saying that “data holds amazing nuggets that can be used to create limitless BI solutions that make a difference in people’s lives”. Throughout Paul’s career, he has been a speaker, lecturer, and writer sharing his passion for Information Technology and Business Intelligence. On a personal note, Paul is an avid runner, Tai Chi practitioner, and youth soccer coach. Paul’s curiosity for knowledge expands beyond technology with a passion for Ancient Egyptology and Gorillas.
@pgrill
Previous Sometimes Dancing Angels Need to be Functional
Next Xcelerate Your Xcelsius Xcellence with Dynamic Dashboard Development Services from InfoSol