Finding Direction through a Snow Storm

Paul January 29, 2011 Paul Blogs on BI Comments Off on Finding Direction through a Snow Storm 1,311 Views

So I landed in Philadelphia in the middle of a snow storm that dumped 15 inches of snow that night. 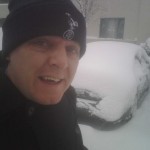 Lots of flights had been canceled and the airport was almost empty.  I was the only person at the car rental pickup where every vehicle had several inches of snow on it.

The attendant took pity on my pathetic attempts to clear the snow off the car and brought over a brush and cleaned off the whole vehicle while I was still working on the first side window!

I made it on to the I-95 freeway which looked more like a ski run than a motorway.  At a top speed of 15 mph and trying to stay on the tire tracks of the car in front, I half drove and half slid along.  The car was tuned into a local college radio station that played oldies and it was somewhat ironic that the song that came on was “When the going gets tough, the tough get going”.  This, along with thoughts of the Jamaican Olympic Bobsled team inspired me to keep moving while I saw others pull over to wait for a snow plough or something.

Being from Phoenix, I have little experience driving in snow.  When I lived in Boston over 20 years ago, I remember doing a spin on some black ice and hitting a fire hydrant.  As I struggled to pull my front fender off my wheel, a police car pulled up.   I thought they would help me but the officer just looked at the hydrant and then the car and said, “You’re lucky the hydrant isn’t damaged”, and then he drove off!

Back on the I-95, I found myself overtaking a police car – something I would normally worry about but I glance at the odometer and see I’m doing a whopping 20 mph!

I arrived on time for my appointment but nobody was there since they had delayed opening for a couple of hours due to the road conditions.

At the meeting, the company presented their major I.T. initiatives for 2011.  Both data governance and business intelligence were high on the priority list.  Like many companies, they recognize the importance of their data and the ability to get meaningful and accurate information and insights from it.

What was really refreshing was that they understood this task was not going to be easy and would require a lot of planning and collaboration with the business and resources.  They understood there was no silver bullet solution.  The CEO had expressed that the company would invest in two major areas to continue their growth and success into 2011 – namely people and technology.  Just to hear this made my journey through blizzards and winter storms more than worthwhile.  This is a smart CEO and a smart company.

They also explained how they were setting up product managers in their individual departments who would be experts on the processes, needs and data of their group and would liaise with a counterpart in I.T. to ensure that the business needs would be optimally met.  In the world of business intelligence I have been professing this approach for more than a decade – the concept of having Data Stewards in each department who are both the focal point for the reporting and analysis needs for their group!

I was on cloud nine now and this was definitely worth sliding around on Interstate 95 to hear a company espousing this philosophy.

I have never seen a successful Business Intelligence solution developed and deployed without the involvement of the business.  That’s worth thinking about.

Paul Grill, Co-Founder and CEO of Infosol Inc., is an information technology guru with more than 40 years’ experience in the IT industry. Recognized as an industry expert, Paul’s vision is to collaborate and develop long-term global relationships, resulting in the successful implementation of business intelligence solutions. Paul believes a company’s success with Business Intelligence is a combination of data and people’s insights and actions. He believes in the coexistence of technologies. With a strong portfolio of clients ranging from fortune 50 companies, start-ups, and middle market, Paul takes pride in his ability to deliver positive transformations impacting company’s productivity and profitability through the application of business intelligence. He is often heard saying that “data holds amazing nuggets that can be used to create limitless BI solutions that make a difference in people’s lives”. Throughout Paul’s career, he has been a speaker, lecturer, and writer sharing his passion for Information Technology and Business Intelligence. On a personal note, Paul is an avid runner, Tai Chi practitioner, and youth soccer coach. Paul’s curiosity for knowledge expands beyond technology with a passion for Ancient Egyptology and Gorillas.
@pgrill
Previous Comparing BI Dashboard Solutions: Hummer vs. Fit
Next IBIS 2011 registration is now open