I arrived late at night at Copenhagen airport and headed for the taxi rank to get to my hotel. As I exited the terminal, there was a large sign pointing to “Danish Taxis” to the right and “Swedish Taxis” to the left. Not understanding the difference, I figured I should opt for the Danish taxis since I was in Denmark.  As we drove to the hotel, I asked the driver about the Swedish taxis and he explained that they were cheaper but they take you to Sweden so I guess I made the right choice!

I checked in at the Kong Arthur Hotel (Kong being King in Danish) and made it to my room where this huge modern painting hung above my bed. 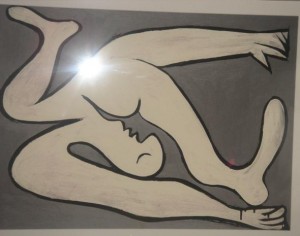 Although I did not see a lot of Denmark in one day, I did get to meet quite a few Danish people in my meetings and learned that Denmark is the home of Lego, Lager beer, ham and Vikings. I also noticed that the average Dane is significantly taller than the average European – must be that special beer and ham!

I was visiting one of the largest companies in Denmark where a couple of the divisions use BusinessObjects for their Business Intelligence. They were interested in finding a better way to schedule, publish and distribute their reports so I showed them a demonstration of the new InfoBurst 2009 along with presenting a few customer case studies. They were particularly excited about the ability of InfoBurst to apply Excel macro post processing. It seems they, like many other companies, have large numbers of Excel users that want all their Business Intelligence reports delivered in Excel format but publishing reports directly from BusinessObjects to Excel does not provide all the features in the Excel output that they want delivered to the user. For example, one customer wanted to make use of data grouping and outlining within Excel for one-click collapse and expansion of individual data groupings in the report. In addition, they wanted each and every data group and outline to be automatically collapsed in the initial delivery of the report – keeping the report compact and easier to view. This simply cannot be done publishing from BusinessObjects to Excel but with InfoBurst 2009, you can execute a VBA macro following report production and produce a revised version of the report for publishing.

This caused great excitement amongst my Danish audience and there were smiles and vigorous hand shaking at the end of the meeting.  I think they really appreciated the logical building block of adding the Excel post-processing – just like Lego!

Paul Grill, Co-Founder and CEO of Infosol Inc., is an information technology guru with more than 40 years’ experience in the IT industry. Recognized as an industry expert, Paul’s vision is to collaborate and develop long-term global relationships, resulting in the successful implementation of business intelligence solutions. Paul believes a company’s success with Business Intelligence is a combination of data and people’s insights and actions. He believes in the coexistence of technologies. With a strong portfolio of clients ranging from fortune 50 companies, start-ups, and middle market, Paul takes pride in his ability to deliver positive transformations impacting company’s productivity and profitability through the application of business intelligence. He is often heard saying that “data holds amazing nuggets that can be used to create limitless BI solutions that make a difference in people’s lives”. Throughout Paul’s career, he has been a speaker, lecturer, and writer sharing his passion for Information Technology and Business Intelligence. On a personal note, Paul is an avid runner, Tai Chi practitioner, and youth soccer coach. Paul’s curiosity for knowledge expands beyond technology with a passion for Ancient Egyptology and Gorillas.
@pgrill
Previous Europe Trip 2010: Day 7 Switzerland – Finding a Common Language
Next Data Quality Dashboards