I knew it was too good to be true when I arrived at Chicago O’Hare airport a few minutes ahead of schedule.  I thought I might actually have time to eat, do my email, test drive my demonstration I needed to deliver the following morning and get 7 hours of sleep – but no such luck.

The marathon obstacle course to get from the gate to the hotel shuttle buses was not just a test of physical stamina but an advanced exercise in orienteering (you know, the sport where you are given a compass and a backpack and race through strange forests and mountains to some mysterious destination).  A mindboggling combination of turns, moving walkways, stairs and escalators left me in front of a set of elevators with a sign showing 7 floors named after Chicago’s sport teams.  Was I supposed to go to the Bears, White Socks or Bulls? Well it turned out to be none of these, it was the Cubs – should have known that!

As I finally stood at the curb waiting for the hotel shuttle, I had already lost the 15 minutes that I had gained from the early flight arrival and added some useful extra mileage to my weekly training schedule.  Meanwhile, I think every Chicago hotel (and there are a lot of them) airport shuttle bus passed by before my little Holiday Inn and Suites shuttle came into view.  Things started to look up a bit when we pulled up to the hotel lobby a few minutes later, and there was a Harry Carey’s restaurant attached and open.  The euphoria was short-lived, though, as I went to check in and the front desk staff told me they had no reservation for me.  They learned I had a reservation at another Holiday Inn and Suites about 10 miles away which has its own shuttle bus that you must call before it comes. This turned out to be a bit like my dog in that even if you call it, it only comes when it feels like it!

I sat waiting in the lobby while a lady arranged her entire wedding reception at the hotel and a group of drunk Japanese businessmen performed either a reenactment of a baseball game or Michael Jackson’s Thriller – or maybe it was a combination. 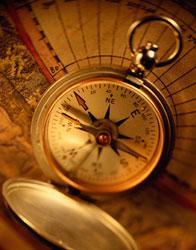 When the shuttle finally arrived, the driver apologized profusely for taking so long, explaining it was the traffic and construction.  I quickly found out it was neither when, for the third time in 10 minutes, he made a U-turn in a different direction.  When I asked him if he was lost, he responded that he was trying to find north – now I really wished I was an orienteer with a compass!

The driver was pretty embarrassed at this point and really felt bad.  He asked if I would like some music but since he was listening to NPR, which I like, I told him that “Public Radio rocks.”

I asked about a restaurant at the hotel.  He said that there was not one there and all of the restaurants in walking distance would be closed since it was now past 10 PM.  When I told him I had not eaten, he offered to take me to a take-out on the way.  This turned out to be a really smart move since, as I got my Wendy’s buffalo boneless chicken wings and fries, he was able to ask for directions!  As we headed out of Wendy’s, in yet another direction, the shuttle driver seemed to have a renewed purpose and was more determined than ever to get us to our elusive destination.

We now embarked on a ride through some very “interesting” parts of Chicago and over roads permanently under construction, with a pot hole every 5 yards.  It was a bit like the turbulence you experience when flying through a severe thunderstorm.  It was impossible to eat or drink, so I had to save my food until we arrived.

Approximately three hours after my “early” landing at O’Hare, we finally arrived at the right hotel  (it should have only taken 15-20 minutes).   I walked up to – well actually into – the automatic opening doors which no longer automatically opened after 10 PM.  With a sore nose and still vibrating from the turbulent ride, I checked in as the desk clerk explained that some rooms had not been properly made up.  So, he would escort me to my room to make sure that everything was in order.  I was too numb to respond or put up any resistance, so I just followed him blindly.

I finally found myself alone in my hotel room at 11:30 PM, facing about an hour of preparation time for my elaborate dashboard demonstration the next morning and feeling a rumble in my stomach.

Of course, I had forgot to eat.   As I lifted my Wendy’s take out bag to place it on the table, the bottom of the bag disintegrated, and my chicken wings hit the ground like a meteor shower.  The sauce had leaked into the bag and completely eaten it away.   Maybe it was a blessing in disguise since I wonder what it would have done to my stomach?
I had one chocolate bar left in my bag.  This would have to sustain me through my demonstration prep.

My demonstration the following morning included a connected dashboard linking to a series of queries running against a SQL server database all running on the VMware windows 2003 server instance.  While VMware has helped us all avoid lugging around extra PC’s and hard disks and partitioning our drives (remember those days?), it still uses a lot of resources on our already tapped out laptops and is not always dependable.  For me, in Chicago, VMware turned out to be as dependable as my hotel shuttle bus and had as many pot holes as the streets of Chicago!  At 2 am, I decided to call it a day and made an executive decision to go with a live connection back to our servers in Phoenix rather than risk the VMware.
As it turned out, this was a good decision. The dashboard demonstration ran smoothly including the live connection back to the data on the servers in Phoenix.

As I sat on the plane heading back for Phoenix, I wondered about the lessons I was suppose to learn from my eventful trip to Chicago, and what I should do differently on my next visit there. Maybe choose a different airport, stay at a different hotel, rent a car with a navigation system, do not buy take-out from Wendy’s, avoid trips in the summer when all the roads are under construction, not use VMware for critical demos or maybe just accept that there is a reason why people sing the blues in Chicago.

Paul Grill, Co-Founder and CEO of Infosol Inc., is an information technology guru with more than 40 years’ experience in the IT industry. Recognized as an industry expert, Paul’s vision is to collaborate and develop long-term global relationships, resulting in the successful implementation of business intelligence solutions. Paul believes a company’s success with Business Intelligence is a combination of data and people’s insights and actions. He believes in the coexistence of technologies. With a strong portfolio of clients ranging from fortune 50 companies, start-ups, and middle market, Paul takes pride in his ability to deliver positive transformations impacting company’s productivity and profitability through the application of business intelligence. He is often heard saying that “data holds amazing nuggets that can be used to create limitless BI solutions that make a difference in people’s lives”. Throughout Paul’s career, he has been a speaker, lecturer, and writer sharing his passion for Information Technology and Business Intelligence. On a personal note, Paul is an avid runner, Tai Chi practitioner, and youth soccer coach. Paul’s curiosity for knowledge expands beyond technology with a passion for Ancient Egyptology and Gorillas.
@pgrill
Previous Tai Chi Swimming
Next Stuffing Olives