Integrate your applications with InfoBurst

Here is a sneak-peak of the InfoBurst® API to be presented in the Report Bursting, Scheduling, Delivery & Administration talk at the InfoBurst User Conference – IBIS 2013. Over 5 years ago we started to think about a new InfoBurst.  One that would take the years of experience that we’ve gathered since InfoBurst launched, and ...

END_OF_DOCUMENT_TOKEN_TO_BE_REPLACED

InfoBurst blog has a new home 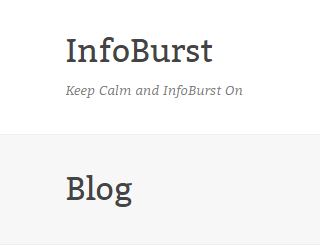 END_OF_DOCUMENT_TOKEN_TO_BE_REPLACED

In addition to the Xcelsius Dashboard Maintenance – Best Practices – Using Labels in Excel I wanted to share other important aspects of making Xcelsius dashboards easy to maintain and for other developers to understand.  One such practice is having some kind of conformity in your approach to how you lay out ...

END_OF_DOCUMENT_TOKEN_TO_BE_REPLACED

As more people deploy Xcelsius dashboard solutions, Xcelsius connectivity options has become a hot topic and I am often asked to compare the most popular methods used by BusinessObjects customers which are Query as a Web Service (QaaWS), Live Office and InfoBurst-XDS (or XDM for non-BOE deployments).

END_OF_DOCUMENT_TOKEN_TO_BE_REPLACED

A few months ago, my two youngest kids received this Rock Band game for Xbox 360 from their aunt. It came with a drum kit, guitar and microphone and basically lets you play and sing along to famous songs by famous rock bands. It also allows you to create your ...