When I was 19 years-old, I decided I wanted to learn car mechanics. I could have gone to a training college but I wanted to “learn by doing” and from a real professional so I walked into a car service company that specialized in Rolls Royce’s and Bentley’s. I figured these were some of the most advanced and exclusive vehicles around so I would learn a lot.

The owner took one look at me and said he was not hiring anyone. I told him I would work for free because I just wanted to learn and I did not mind doing all the grunt work. He was impressed by my offer and told me he would take me on a trial basis and to start the next day.

I was teamed up with their top mechanic who had been there for 6 years but told me that he also knew nothing when he started. For the first three days, he showed me everything involved in the mechanical service of a Rolls Royce. He explained what he was doing as he was doing it. Then it was my turn. I made plenty of mistakes but that helped me to learn

Within a week I was doing oil change and check-up services on my own, within 2 weeks I was replacing brakes and after a month I was doing major services and clutch replacements.

It was hard work but watching my mentor in action, not only did I learn how to service and repair these magnificent vehicles but I learned all the pitfalls to watch out for, all the shortcuts and the best practices.

I passed my trial period with flying colors but I had to leave after two months to go to university. The contrast could not have been starker as I moved to a world of attending lectures, learning from books and participating in philosophical discussions. I can honestly say that I learned more in my two months as a car mechanic apprentice than I did in my entire first year of university.

While some people can learn through the more traditional academic methods, I have always found it to be more effective using the learning by doing approach.

When we look at designing and developing Xcelsius Dashboards, it is easy to learn the basics from a traditional course but if you want to design and develop true Business Intelligence dashboard applications, you will learn a lot more effectively by working alongside an expert.

Dragging and dropping components onto a canvass, defining their properties, connecting the components to data sources can look simple but when you want to add dynamic visibility, include over a hundred metrics, access millions of rows of data, include complex “What If” scenarios and write back to the database while creating the most awesome looking visual interface, it becomes more challenging.

However, experienced dashboard designers and developers who have learned by repeatedly doing can help both new people and those who have learned through traditional training to take their skills to a whole new level in a very short period of time.

It is for this reason that a combination of Xcelsius dashboard boot camps and hands-on knowledge transfer has proven to be the best and fastest path to becoming a top notch dashboard creator.

InfoSol has been offering both beginner and master Xcelsius Dashboard boot camps for several years and as the experience of the InfoSol dashboard experts has evolved so have the boot camps. After the boot camp, the best way to fully absorb everything you learned is to work on a dashboard project side-by-side with an Xcelsius Dashboard expert who will both mentor you and help to create a first class dashboard application that you can use as a template for others going forward. 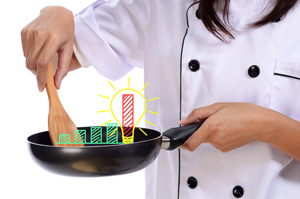 This year a brand new boot camp has been developed that focuses more on developers who have been creating Xcelsius dashboards for a while. The boot camp is entitled, Dashboard Design Iron Chef Bootcamp – Using SAP Dashboards 4.X. As the name suggests, it was conceived and created around the idea of how to help dashboard developers become “Iron Chefs” of their craft by designing dashboards that both stand out and attract user adoption.

Dashboards remain the most popular and effective way to deliver Business Intelligence solutions and will remain so for a while to come. Dashboard “Iron Chefs” creators are in demand and there is no better time than to seize the opportunity and become one.

Paul Grill, Co-Founder and CEO of Infosol Inc., is an information technology guru with more than 40 years’ experience in the IT industry. Recognized as an industry expert, Paul’s vision is to collaborate and develop long-term global relationships, resulting in the successful implementation of business intelligence solutions. Paul believes a company’s success with Business Intelligence is a combination of data and people’s insights and actions. He believes in the coexistence of technologies. With a strong portfolio of clients ranging from fortune 50 companies, start-ups, and middle market, Paul takes pride in his ability to deliver positive transformations impacting company’s productivity and profitability through the application of business intelligence. He is often heard saying that “data holds amazing nuggets that can be used to create limitless BI solutions that make a difference in people’s lives”. Throughout Paul’s career, he has been a speaker, lecturer, and writer sharing his passion for Information Technology and Business Intelligence. On a personal note, Paul is an avid runner, Tai Chi practitioner, and youth soccer coach. Paul’s curiosity for knowledge expands beyond technology with a passion for Ancient Egyptology and Gorillas.
@pgrill
Previous Limitless BI – Up, Up and Away
Next Looking Too Far Ahead Can Lead to Painful Result