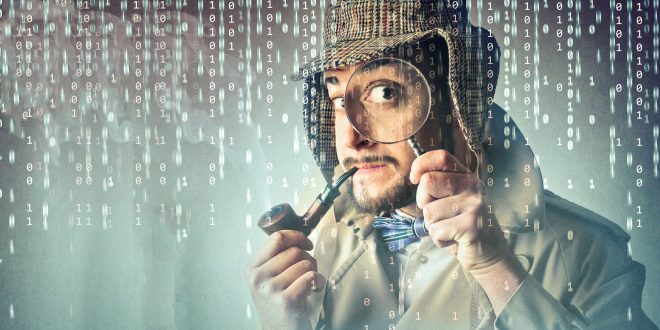 I never get tired of hearing Business Intelligence success stories and I always tell myself when I hear them, that I must blog about them.   Unfortunately, by the time I get around to doing it, I go back to my notes and find them sadly lacking in details.  You see, I am one of these people who take cryptic notes that nobody can read or understand – including me!

So, the best way I have found to recall these stories is to tell other people about them in conversations.  I sometimes highlight them in an episode of my LimitlessBI podcast.  Better still, I have invited customers or partners to present their story at one of our events.

This is what I did with Hermes in the UK who have graciously presented their great case study at our events three times in the last 12 months and, I must say, each time I hear them tell about the solution, I am excited by how the story gets more fascinating and continues to evolve each time.

Hermes is the second largest parcel delivery company in the UK (only the Royal Mail is larger). At the end of last year, they had upwards of 2 million parcels a day flowing through their network of hubs and depots. By the end of this year, due to a combination of continued growth and the COVID-19 pandemic, they expect to hit 3.5 million parcels a day. 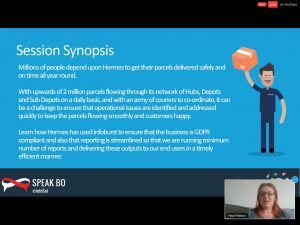 In addition to the present circumstances created by the pandemic and affecting our world currently, their on-going success can be attributed to several factors including their great pricing, convenience, personal touch and investment in digital transformation and technology.

One of those technology investments was in Operational and Business Intelligence Report distribution. Hermes uses SAP BusinessObjects extensively with two major instances producing Web Intelligence reports that are critical to many facets of their business.

About 3 or 4 years ago, they faced multiple challenges in effectively delivering these critical reports, not least of which, was compliance with GDPR (General Data Protection Regulation) which is mandatory in Europe. At that time, Hermes was using the built-in BusinessObjects scheduling and publishing to distribute most of their reports by email. This would not be secure enough for GDPR and in order to remain compliant, they needed to send the reports to a secure FTP site that, in turn, would be accessed through a secure portal.

What was lacking in BusinessObjects publishing, was that it was not able to dynamically name and create the folders and files on the secure FTP site. However, InfoBurst was able to do this and a lot more beside so Hermes decided to evaluate it.

During the evaluation they not only found that InfoBurst could quickly solve their GDPR challenge, but it could also dramatically reduce the number of daily instances they needed to run, and also reduce the report run times. InfoBurst has very flexible single pass bursting where the data refreshes once rather than multiple times and then can intelligently split and automatically distribute the resulting outputs. Hermes were able to reduce their 10,000 daily report instances to just 1,000 and contract 1-hour report run times to a staggering 10 minutes!

Obviously, they purchased the product and have been making extensive use of it ever since.  One of the other features they make a lot of use of is the scheduling priority in InfoBurst that can prioritize some reports over others. This has been especially useful to Hermes during peak periods when sometimes volumes can double or even triple especially currently, during the COVID-19 pandemic.

Hermes also makes use of the content grouping feature in InfoBurst that allows them to take different parts of different Web Intelligence reports and then stitch them back together into a single report in PDF or Excel.  This has helped with some of the operational reports that come out early in the morning after the night shift identifying exceptions like parcels that did not go out from the depot so teams can proactively chase those parcels and make sure they get priority and are not delayed further. With InfoBurst, Hermes are able to split different exception reports by divisional area and then combine and produce a single report so each divisional manger can see just the issues associated with their area.

There is a lot more to this great success story and a recording of the customer presentation is coming soon.

During these difficult times, it is good to hear these kind of success stories.  I would love to hear others so please feel free to add a comment to this blog if you would like to share yours.

Paul Grill, Co-Founder and CEO of Infosol Inc., is an information technology guru with more than 40 years’ experience in the IT industry. Recognized as an industry expert, Paul’s vision is to collaborate and develop long-term global relationships, resulting in the successful implementation of business intelligence solutions. Paul believes a company’s success with Business Intelligence is a combination of data and people’s insights and actions. He believes in the coexistence of technologies. With a strong portfolio of clients ranging from fortune 50 companies, start-ups, and middle market, Paul takes pride in his ability to deliver positive transformations impacting company’s productivity and profitability through the application of business intelligence. He is often heard saying that “data holds amazing nuggets that can be used to create limitless BI solutions that make a difference in people’s lives”. Throughout Paul’s career, he has been a speaker, lecturer, and writer sharing his passion for Information Technology and Business Intelligence. On a personal note, Paul is an avid runner, Tai Chi practitioner, and youth soccer coach. Paul’s curiosity for knowledge expands beyond technology with a passion for Ancient Egyptology and Gorillas.
@pgrill
Previous BI Dashboard Awards 2020 Show Sign of the Times
Next When Your Dashboard Goes Blank – Who do you call?

One of the often overlooked additions given to us in the 4.2 SP3 release was ...